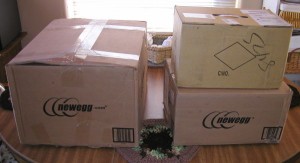 A Small Mountain of Parts

Before I link the roughly two dozen pictures of my little project in various stages of construction, I’d like to share the list of parts I selected specifically for this project. While I will be including approximate prices next to each component, please be aware that the cost of commodity parts changes so dramatically (and frequently) that 1) you might not be able to find these components and 2) component prices are guaranteed to be in a state of flux. If you purchase the exact same items, you might wind up paying more or less than I did depending on promotions, product supply, and our good old pal “demand.”

The grand total, plus shipping, was a little over $400. I was expecting to spend about $200 on the motherboard, so my estimated budget was between $500-600. I haven’t purchased a video capture card yet precisely because I wanted to test the system out first. Thus, video capture will be covered in part 3. The plus side is that I can spend a little more on the card given that I’m about $100 below cost.

I could have gotten away with spending less than $300 on this system if I hadn’t purchased the UPS, used an existing hard disk, possibly delayed purchasing an IR remote, and used an existing keyboard/mouse setup. Eliminating these would have resulted in a cost of about $270 and doing without the USB wireless adapter would’ve reduced the cost to just a little over $200. Here’s my rationale for making this large a purchase:

As you can see, I had a few constraints to work with. I certainly could have worked around them, but given how cheap the Atom processors are it’s almost senseless to cut corners and risk delaying the final product because something I had sitting around didn’t work. For example: Imagine if I stuck an old hard disk in the box, put in hours and hours of time getting the media center tweaked just right–and then it dies! Sure, new disks can die, but at least I can RMA it! Using an old spare that kicks the bucket would mean I’d be out the funds anyway and the shipping time.

Let’s take a look at the pile of parts and get started with the box itself, shall we?